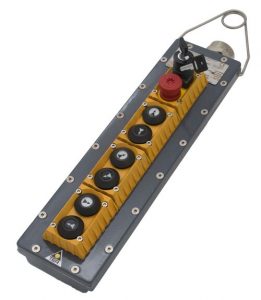 What is Intrinsically Safe Equipment?

What’s the difference between intrinsically safe vs explosion proof? When using equipment in hazardous environments there are several ways to make the equipment safe to operate. One method is to make the equipment “intrinsically safe”. This means the equipment is designed so that both thermal and electrical energy is limited to prevent the possibility of ignition. In the case of thermal energy, limiting the heat generation and buildup to prevent the possibility of reaching the ignition temperature of the hazardous substance. Zener diodes are commonly used in a voltage regulator circuit to control voltage. Fuses and resistors can be used to limit current. Allowing the heat to dissipate by using thermally conductive materials, as well as heat sinks or cooling fins, can also limit heat buildup.

Limiting electrical energy often means preventing the possibility of sparks by keeping the voltage and current low. 24Volt circuits are commonly used for intrinsically safe equipment because the low potential helps to prevent sparking. Current is often limited as well.

What Does Explosion Proof Mean?

Explosion proof, on the other hand, is designing the equipment, not to prevent ignition, but to contain any explosion within the equipment itself. Anyone that has worked with electrical equipment in hazardous environments is probably familiar with thick, heavy cast aluminum electrical enclosures. These are designed that way to contain any explosion within the enclosure. This allows equipment with higher power to be operated in these environments. However, it is important to maintain the integrity of the enclosure, particularly at cable entry points. Conduit with conduit seal is often required to prevent the explosion from exiting the enclosure via the cable entry point, but also to prevent hazardous materials from entering the enclosure.

Designing a Safe System Depends on the Operation

The exact method used to make equipment safe for operation in hazardous environments is specific to each piece of equipment. No single method is suitable for all, so understanding all the options and evaluating what is appropriate for your operation is essential when designing a safe system.